Speaking of lighting standards, Chinese manufacturers said that Europe and the United States high-demand technical and safety standards are invisible technical barriers to trade. The industry believes that the domestic LED lighting industry to break these technical barriers to the overseas market, first of all, we need to understand the European and American lighting standards on LED lighting products safety, electromagnetic compatibility, performance, and other requirements. 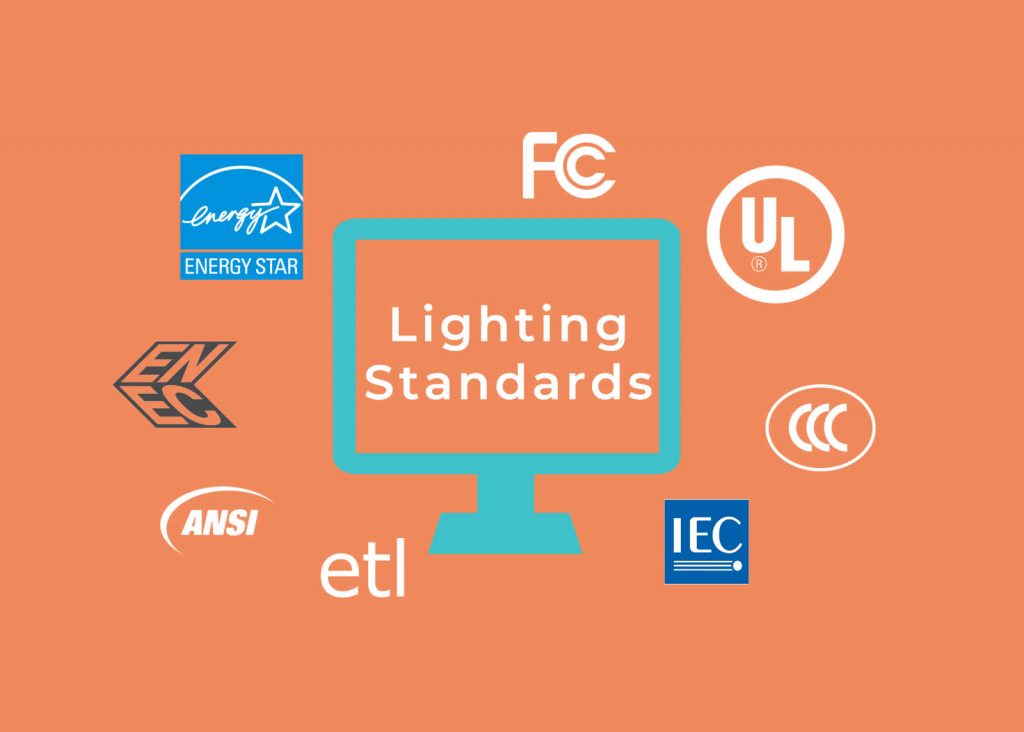 American National Standards Institute, a voluntary organization of companies, governments, and other members that seldom sets its own standards. ANSI standards are voluntary, but are cited by law and set by government agencies Is generally a mandatory standard.

Short for Underwriter Laboratory Inc. UL Safety Laboratory is the most authoritative in the United States and the largest private organization in the world engaged in safety testing and certification.

A U.S. government led energy saving program for Consumer Electronics, was launched by the United States Environmental Protection Agency in 1992 The goal is to reduce energy consumption and greenhouse gas emissions from power plants.

China Compulsory Certification. On December 3,2001, China began to implement a compulsory product certification system. The original “CCIB” certification and “Great Wall CCEE” certification were unified as “China compulsory certification” , which is abbreviated as “CCC ” in English Referred to as “3C” certification, its product catalog contains 19 categories and 132 kinds of products. The products in the catalog must be certified by a certification body designated by the state. After obtaining the relevant certificates and applying certification marks, can Be ex-factory, import, sale and use in the place of business services.

5. ENEC adopts the “Standard European Committee for Standardization” Standard and CE adopts the “International Electrotechnical Commission” Standard, but the contents of the two standards are identical;

The main certifications for export to the North American market include UL, ETL, FCC, and ENERGY STAR. LED road lighting products UL certification refers to UL8750 or UL60950, UL1598 two standards, does not test the EMC characteristics of lamps, ETL certification test reference It is exactly the same as the UL standard. FCC certification refers to FCCPart15B, ClassAdigitaldevice test limit standard, does not test the safety characteristics of lamps; ENERGY STAR is mainly for the photoelectric performance requirements of LED lamps for residential areas and commercial lighting, LED road lighting is not listed here; Introduce the more common UL and FCC certifications for introduction and analysis:

Mandatory certification of electronic products in the US laws and regulations always includes Title1 to Title50, of which Title47 is a telex video product, a total of Part0 to Part499 part, of which Part0 to Part199 is FCC. The FCC certification method is divided into Verification, declaration of conformity and Certification. When using Verification, there is no requirement for the test laboratory, and no test is required (as long as the product can meet the corresponding requirements). Technical requirements) and do not need to provide information to the FCC; when using Declaration of Conformity, the test laboratory needs to obtain NVLAP, A2LA qualification or FCC-certified laboratory, and requires a multilateral mutual recognition agreement, but does not need to provide information to the FCC; At the time, the test laboratory needs to be registered on the FCC website, officially recognized by the FCC, issued by the TCB agency designated by the FCC or FCC, and required to provide information to the FCC, and at the same time obtain an FCCID. Which certification method is adopted depends on the type of product. The FCC test standard for LED luminaire products is FCCPart15B, and the certification type is: Verification.

UL certification is a non-mandatory certification in the United States, mainly for the testing and certification of product safety performance, and its certification scope does not include the EMC (electromagnetic compatibility) characteristics of the product. The following is a brief introduction to LED road lighting products related to UL8750, UL1310 and UL60950. The UL8750 is suitable for the minimum safety requirements of LED lighting source components that will be installed in non-hazardous locations with a rated 600V branch or lower. It is also suitable for the minimum safety of LED light sources connected to isolated (no active connection) power sources such as batteries and fuel cells. Requirements; UL1310 is suitable for use with input voltages of 120 or 240Vac via software or directly plugged in a 15 or 20A AC branch circuit or potentially less than 150V grounded, using an insulated transformer and can be incorporated into a rectifier and other components to provide DC or AC energy. CLASS2 power supply equipment that is expected to be used to provide energy for low-voltage power operation; UL60950 is applicable to safety standards for information technology (IT) equipment, including mobile phones, computers and peripherals such as projectors, printers, etc. Includes a power supply that outputs a safety loop with an LPS (Limited Power Supply).

In the UL certification of LED lighting products, the driver certification test can be UL1310 or UL60950. The main differences between the two standards are as follows:

2, UL1310 standard specifies the output voltage under any load conditions, the maximum output voltage of the power supply (including no load), the exposed contact voltage peak value is 42.4V, when the device does not contain the maximum output volt-amperes that can automatically be in the output circuit power-off device 100 volts; UL60950 defines the voltage between any two accessible circuit components under normal output voltage conditions, or the voltage between any accessible circuit component and the protective earth terminal of Class I equipment, not exceeding 42.4V AC peak, or 60V DC value;